Warning: "continue" targeting switch is equivalent to "break". Did you mean to use "continue 2"? in /nfs/c01/h02/mnt/3521/domains/v1nc3nt.com/html/wp-content/plugins/revslider/includes/output.class.php on line 3622
 CrossFit Empower – V1NC3NT
Previous Next
CrossFit Empower

Have you ever consider working out in the buff? That’s exactly what my friend Corey Lapell did to kick off his Where in the World is Fran world tour with a mission to perform the infamous CrossFit workout Fran across the globe. 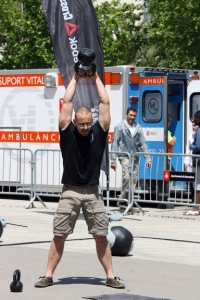 I first met Corey at CrossFit Vancouver while he was going through the apprentice coach program. He’s an inspirational example of someone who had the courage to walk away from a comfortable life and risk making radical changes in pursuit of growing a dream.

After he and his amazingly supportive family returned from their world tour, they decided that their calling was to open up a CrossFit gym in the Dunbar neighbourhood of Vancouver. In a crowded market of CrossFit gyms, Corey’s positive energy and inclusiveness makes him stand out – he’s a knowledgable coach who genuinely cares for his clients and tailors workouts for every age and ability.

For the grand opening of CrossFit Empower I created this poster as a gift. I tried to encompass the diversity of CrossFit workouts, Corey’s philosophy of personal growth and of course a little classic CrossFit white and blue. The silhouette of the kettlebell-swinging person is based off of a photo of Corey at a CrossFit competition. In hindsight I probably should have drawn it in the buff.